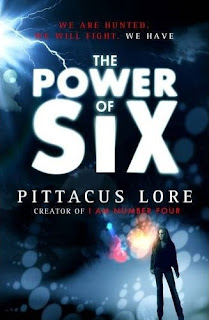 I've seen him on the news. Followed the stories about what happened in Ohio. John Smith, out there, on the run. To the world, he's a mystery. But to me . . . he's one of us.

Nine of us came here, but sometimes I wonder if time has changed us—if we all still believe in our mission. How can I know? There are six of us left. We're hiding, blending in, avoiding contact with one another . . . but our Legacies are developing, and soon we'll be equipped to fight. Is John Number Four, and is his appearance the sign I've been waiting for? And what about Number Five and Six? Could one of them be the raven-haired girl with the stormy eyes from my dreams? The girl with powers that are beyond anything I could ever imagine? The girl who may be strong enough to bring the six of us together?

They caught Number One in Malaysia.
Number Two in England.
And Number Three in Kenya.
They tried to catch Number Four in Ohio—and failed.
I am Number Seven. One of six still alive.
And I'm ready to fight.

Thank you to Puffin as always, for providing me with such awesome books and this was no different.
A sequel to the awesome I Am Number Four *for which the review can be found here* this packs in the same thrilling action, easy readability and intensely interesting characters that made I Am Number Four such a hit.

Told this time through the perspective of a new character, Number 6, we come to view the world through the eyes of a female, which is a nice contrast from John - but don't be disheartened fellow John lovers! He's in here too, as there's alternating parts between the two, telling of their tale, the new experience for Number 6 and for John, the emotional ordeal of losing Henri and feelings for Sarah. The dual narrative helps us to distinguish and differentiate between the two great characters and get a scoop from each of them in what is going on that eventually neatly combines to give us one heck of a fast paced read.
John's choices for sure, made for an enthralling read that brought forth the action and welded a comradeship between Number 6 and himself. Teamwork is a plus in this book and I loved seeing them work together.

Similarly, another feature that I loved, was how Lore took the Mogadorian legacy and expanded it further, brought in more details and sharpened the readers mind to alert them to the new characters that were emerging in the tale. I felt that by the end of the book, I was starting to see the picture and how it was all coming together and this was done effortlessly through Lore's writing. The descriptions, characters, pace, events, all added a thrilling sense of anticipation to the novel that makes it hard to put down.
Lore makes his sequel one hell of a read and I can't wait to see what happens in this series.