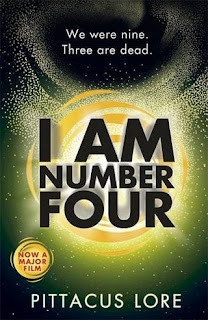 Summary:
There were nine. Three are dead. I Am Number Four.

Nine teenagers and their guardians are hiding on Earth... protected by a charm that means they can only be killed in numeric order, three are already dead. John Smith is Number Four. And his mortal enemies, the Mogadorian, are hunting him down.

The only way to keep off radar is to keep moving, never staying in one place for long. Finally in the firing line, all he can do is adopt the guise of a student and pray his unusual gifts—his legacies home; Planet Lorien—stay hidden long enough for him to settle into this new community.

But others seem to sense his otherness and when small-town life sucks him into its intrigues, it’s only a matter of time before his true nature is revealed. And that means there’s no space for love, friendship or a future if it means protecting not only himself, but the other five...

Review:
This is one of the rare occasions where I've actually seen the movie before the books and I have no idea why I hadn't picked up the book before, especially after reading this now! So thank you again to Puffin for winging this my way.

Also, I'd like to add, that throughout the book, I did indeed picture John as Alex Pettyfer from the movie; he's beautiful...gosh.. anyway! Before I get caught up on that, on with the review!

I was thrown in to the story from the very first page, and the author doesn't waste any time faffing about and gets stuck in, introducing out character John and his tale. I must say, aside from openings like "I'm dead" the short and snappy kind are my favourite so instantly I settled down in my bed, excited for a good read and I wasn't disappointed :)

From there on, which quick paced writing and events to match, Lore recounts how and why John came to where he is. We are introduced to a wide variety of characters aside from John and I personally felt they were all very well rounded characters who weren't just thrown in for the sake of it. They contributed to the story and each had a certain.. I'd say "vibe" to them. They were great.

As for John, I instantly felt drawn to his character as Lore built him up to be one of those dark, strong and dangerous characters who has a soft core filling. So when someone special comes in to his life and he shows that side to him, it's all the more special 'cause we know he wants to be a bad-ass but not with her he won't. Those moments in the story made me swoon. Good going Lore, props on the mad characteristics.

Aside from those cute moments, I was actually intrigued by the legend and the legacies that follows John's character and those of his people. While the movie itself depicted the chase and the thrill really well, I must say that I prefer the book version more as it gave me a chance to build up the events for myself in my head and Lore's very descriptive work helped me do just that. Aided visualising.

This book had everything - love, action, thriller, humour, aliens, *yes, aliens* and it was something I didn't I'd enjoy but was surprised and happy that I did. Wait for my review on it's sequel, The Power Of Six, which can be found here.