It's Not Summer Without You (Summer Series #2) - Jenny Han; Review. 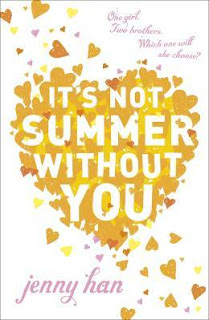 Summary:
Can summer be truly summer without Cousins Beach? It used to be that Belly counted the days until summer, until she was back at Cousins Beach with Conrad and Jeremiah. But not this year. Not after Susannah got sick again and Conrad stopped caring. Everything that was right and good has fallen apart, leaving Belly wishing summer would never come. But when Jeremiah calls saying Conrad has disappeared, Belly knows what she must do to make things right again. And it can only happen back at the beach house, the three of them together, the way things used to be. If this summer really and truly is the last summer, it should end the way it started - at Cousins Beach.

Review:
Thanks to Puffin for sending my way this great series, I had already read and reviewed the first book in this series, "The Summer I Turned Pretty", the review for which can be found here.

Although I only gave the first book 3 stars, I was still intrigued enough to see what happens to the characters and which brother pulls for Belly the hardest. I'm glad I got to read the second book because this one was worthy of the four stars winging it's way to it.

The characters of Belly, Jeremiah and Conrad take you on another journey, this time they have all grown a little older and a little wiser yet you can't help but love all of them.

We were left in the previous book with the shock of Susannah passing away, a cloud wraps around the two brothers and Belly, yet in this book we get a chance, through Belly and Jeremiah's point of view, to experience the turmoil they are reeling from.

The alternating point of view is more useful for more than just one reason, as it not only gives us more depth but also allows us to finally hear one of the brothers mind, especially one as sweet as Jeremiah and we get to see the extent to which he's fallen for Belly.

As for Belly's character, she used to be a child, she was selfish at times, and for me, I felt she was too young and childish to have gone through the experience of falling for someone in the first book. While she still retains most of her characteristics in this book, she has gotten older, and wiser but you can't fault Han's portrayal of Belly as she encapsulates truly, what it was like to be young and to be going through such ordeals at that age. While I may not personally agree with all the things she does or her though process, I can appreciate others who will.

As for the brother's, we get a deeper insight in to Jeremiah's mind and he's always been, for me, the better of the two brothers - and the way he thinks and feels about Belly makes you smile. In comes the mysterious Conrad, who's elusive, dark and moody, yet there's a certain charm to his character and you can feel his struggle after losing his Mum - again Han's has captured those dark emotions carefully, without being too dramatic yet light enough to be called a summer read.

Overall, I found this to be a much better read than the first book and was lucky enough to get a copy of the third and final book in the series, We'll Always Have Summer :D - the review for which can be found here.