What Happens Next - Colleen Clayton; Review 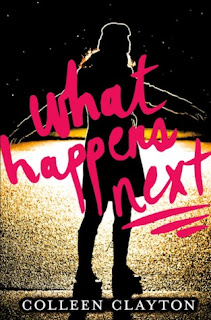 How can you talk about something you can’t remember?

Before the ski trip, sixteen-year-old Cassidy “Sid” Murphy was a cheerleader (at the bottom of the pyramid, but still...), a straight-A student, and a member of a solid trio of best friends. When she ends up on a ski lift next to handsome local college boy, Dax Windsor, she’s thrilled; but Dax takes everything from Sid—including a lock of her perfect red curls—and she can’t remember any of it.

Back home and unable to relate to her old friends, Sid drops her college prep classes and takes up residence in the A/V room with only Corey “The Living Stoner” Livingston for company. But as she gets to know Corey (slacker, baker, total dreamboat), Sid finds someone who truly makes her happy. Now, if she can just shake the nightmares and those few extra pounds, everything will be perfect... or so she thinks.

Witty and poignant, Colleen Clayton’s stunning debut is a story about moving on after the unthinkable happens.

I’ve been making a point to explore books that deal with serious issues to suss out the kind of representation topics are getting. As hard as some of them are to read, I’ve read a lot of books that deal with rape and sexual consent. Reviews on such books like What We Saw can be found here, Exit, Pursued By a Bear can be found here. Today is another one of those books, this one called What Happens Next.

After having finished this book, to me at least, this felt like it could be classed more as an introductory sort of book - this does deal with the issue of rape, but it didn’t delve too deeply into darker areas, and instead it kind of scratched the surface. This is a book you can read, somewhat uncomfortably if at that (given what this deals with) but it won’t steal your nights sleep. And I don’t mean that in a bad way at all - this book acts as a paving stone to other issues that are explored more deeply and darkly in other books.

I feel like when it comes to these kinds of books, there are different stages of rape that they deal with and narrow in one - whether it be about writing about the damage it does to an individual because of the ordeal and how they change because of it. Or it deals with the aftermath, of recovery, of finding a way to get past it. Or like in this stage, it’s about wanting to get past in and try and get back to a level of normalcy that has been denied to you because of what happened. This book to me, sent a positive message out, as with other books about issues of rape - that what happened to you, does not define who you are. It’s not a part of who you are, it’s not embedded into what makes you, you.

The characters that the author brings to this story, were perfect in getting that message across. They were individualistic, had their own persona and charm and made the story what it is. I especially loved Corey - who unlike other YA males, wasn’t some McHottie who just happened to fall for our female lead, but instead he’s described as “The Living Stoner” who by the way, bakes *instant drool* and spends his time secluded away from everyone else. Which is where Cassidy, avoiding all things human contact, ends up secluding herself and instead finds comfort with spending time away from people, but with Corey. Corey is such a sweet, honest, and caring guy, he’s not a big opposing personality that forces Cassidy to confront her feelings and reality, but instead he’s like a warm hug that envelopes you, makes you feel at ease. Though this book isn't about the romance, it did a good job in bringing a sweet story to the surface.

Family and friends, support from those around you, some from unexpected places, are the central themes of the book and I love that, because it gives off a really positive vibe, rather than a dark and negative one - which hey, I totally understand because what this book and other books of a similar nature deal with is not pretty, it’s harrowing and horrific - but we also need books that show us the positives of moving forward, of the stage of moving past what happens and re-embracing everything you hold near and dear to you. There is no right and wrong when it comes to stories like these. But there is a certain level of responsibility to authors who tell these stories to tell them well, tell them with sensitivity, and I feel like the author has done that really well in this book and the way it’s written.

This is, as I said, still not an easy book to read given the nature of what is explored. But it shows us about the importance of trusting again, finding love and solace and peace within and from those around you. There was justice in this story, however brief it was; I know the reality of convictions in rape cases are not as they should be, justice isn’t always served - but in fiction at least, I think it’s important to show that there can be, that you should still save that shred of hope in some form or another, that what happens to you doesn’t go unnoticed. Sometimes, like in old cases we’ve seen of the India Delhi gang rape of Nirbhaya, or in more recent times, of Theo in France - it can move mountains and shake the world - but also, reporting it, acknowledging it, and finding the strength to move past it, is just as important and just as empathetic and beautiful and heroic.