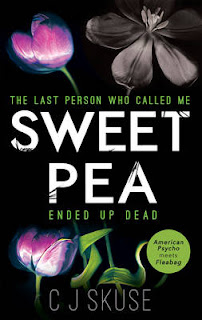 The last person who called me ‘Sweetpea’ ended up dead…

I haven’t killed anyone for three years and I thought that when it happened again I’d feel bad. Like an alcholic taking a sip of whisky. But no. Nothing. I had a blissful night’s sleep. Didn’t wake up at all. And for once, no bad dream either. This morning I feel balanced. Almost sane, for once.

Rhiannon is your average girl next door, settled with her boyfriend and little dog…but she’s got a killer secret.
Although her childhood was haunted by a famous crime, Rhinannon’s life is normal now that her celebrity has dwindled. By day her job as an editorial assistant is demeaning and unsatisfying. By evening she dutifully listens to her friend’s plans for marriage and babies whilst secretly making a list.

A kill list.
From the man on the Lidl checkout who always mishandles her apples, to the driver who cuts her off on her way to work, to the people who have got it coming, Rhiannon’s ready to get her revenge.

Warning: spoilers up ahead.

Where do I even start with this book? Wild. PURELY WILD. This was such an unapologetic, crazy, hilarious and, weirdly, fun read - which probably says something about my mental state given this story is about a psychotic killer? But my one line of defence is the fact I lent this to a friend and she loved it, and loved me for giving her such a great story, which in itself is saying something since she’s read so many crime/thriller novels but claimed this as being one of the best. *smug look*

The absolute best thing about this book, is the main character, Rhiannon - who by day is a editorial assistant but by night, takes on a far sinister hue - as a serial killer. You will either come to love her or hate her, depending on your mental balance I guess, but I loved her. Written in the form of diary entries from her, each one starting with a kill list of people who have annoyed her - which to be honest these people on the list, I would agree with - but lets not forget the biggest difference being, that in this case, she could actually kill them. After being the lone survivor of a horrific crime as a child which elevated her to minor celebrity level for a while, the far less favourable consequences were that due to the event, a part of her brain was damaged - leaving her with a lot less empathy and compassion and pretty much the makings of a serial killer. But hey, she only goes after the bad guys - a vigilante, yep. Whether it be the guy who tried to assault her near the canal (man oh man, this scene had me yelping out loud and laughing under my hand - it’s so blunt and hilarious the way it happens), or the girl who tormented her childhood and she pretty much returned the favour.

Though a lot of her acts and crimes are quite violent, her narration, her diary entries and comments on each of them really colour the situation and give it the funny and sarcastic hue which somehow works so well for this book - but anywhere else, written in any other way, would have been a disaster I feel. There are one too many metaphors I feel in the story overall, which really could have been done without - but to be honest, this whole book is made from diary entries from Rhiannon and therefore it’s all a part of her thought process and the way she sees and talks about things - and oddly the excessive use of these metaphors fit with who she is painted as being.

Though I’m trying not to find this alarming, there’s a lot about her character that I connected with - her human and honest annoyances, to the people she hangs out with, to her commentary on peoples daily acts and obvious tendencies, her day to day grievances - a lot of it really was just real and honest things about people’s nature that everyone is thinking, but no one says. Rhiannon does though *need to stop thinking of her as my friend and ally…*

On the other hand, I did find it a little hard to coincide her character during the day, with the one she becomes when her bloodlust acts up. When she gets in the mood for murder (wow is this a weird thing to type) but she’s confident, meticulous, brash, unafraid - yet when she’s at work, or with her friends, she plays the downtrodden mouse, who just becomes the doormat and lets it all go. I wanted to see at least some scenes, towards the end maybe, where the facade slowly slips and she becomes that alter-ego at work, with her friends, and lets it out. But given the way the book ends *whistles slowly* maybe my wishes will be answered? Maybe someone has already seen the killer lurking behind her eyes? WHO KNOWS. I WANT TO KNOW THOUGH.

There was a vast array of characters playing background music in this book, one that I particularly hated was Rhiannon’s sister - she would deffo be on my kill list.. uhh like hypothetically, not that I have one, noOoPe *starts getting flustered*. I’ve read previous books by this author, CJ Skuse, and they were mostly YA and this is such a stark contrast to everything she’s written before - but it’s a hell of a book and will be making waves this year as being different and distinct. People will just KNOW what book you’re talking about when you mention this. Yep, I called it, you can quote me and thank me later.

Now. The ending. PHEW THE ENDING. Once you get there, you’ll know what I mean. There will be a second book, and it’ll be VERY obvious as to why once you reach the end - but man, when I read that last scene, I actually couldn’t stop laughing and thinking OH MAN OH MAN. All this time, as we read about her crimes, a small part of the reader will think they deserved it, justice has been served, which staves off the notion of how crazy this actually all is - but when you reach the end of this book, you realise how truly crazy she is and the hot mess she has landed herself in *pun intended - you’ll see*.

This book - it’s quite crude, graphic and violent - but somehow you’re cheering along for Rhiannon.  Utterly unpredictable and such a wild read. Two of my friends loved it, but it will be a marmite book, some will honestly hate it for being brash and bold but otherwise will love it for that very reason. Keep your eyes peeled for it, it’s out April 20th, 2017 from HQ, HarperCollins. And as if that wasn't fantastic enough news.. there's more. MORE MORE MORE.

TV rights have just been sold for Sweetpea to the producers behind the Oscar nominee Lion!
LIKE CAN WE GET A HURRAH! How epic is this going to be? MIGHTY EPIC I SAY.