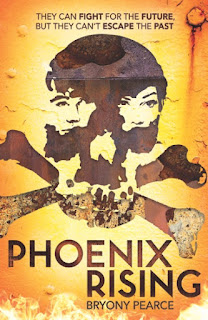 In a future world where fossil fuels have run out and democracy has collapsed, an outlawed pirate crew fight for survival on their ship, the Phoenix, kept afloat by whatever they can salvage or scavenge on the debris-filled seas. Toby has never known anything other than life onboard the Phoenix and he's desperate for adventure. But when trouble comes hunting the Phoenix down, Toby realizes that what you wish for isn't always what you want. He meets beautiful Ayla from the Banshee, a rival pirate ship and sworn enemy of the Phoenix, and his world is thrown into disorder. How can he know who to trust and what to believe? The future rests on him making an impossible choice...A gripping novel, perfect for fans of Anthony Horowitz, Eoin Colfer and Suzanne Collins.

Thank you firstly to Stripes Publishing for involving me in promoting this book, from a signed review copy to putting me in the blog tour - the dates for which can be found here so be sure to pop over to each blog on the individual days to get your dosage! Also, an author interview with Bryony Pearce can be found here, which she kindly took time out to do and has some exciting answers to share with you all on the questions I pitched her. Additionally, she’s been swell and given us a guest post which you can view here, about adventures in reading.

Now on to the review we go! I’m going to start by saying that I was recruited as #TeamPhoenix whoop whoop but  fear not my review does not take me away from my loyalty ;) Anyway here we go!

Phoenix Rising begins with some illustrations and newspaper clippings that foretell the slow demise of the world as we know it. Banks are collapsing, war over oil, power blackouts across the world, chaos brewing everywhere we look. Sound somewhat familiar? (and devastatingly scary). This has become the future of the world we’re living in, civilisation is on the brink of disaster and in the midst of all this, is where our story really starts. I also love the way the newspaper clippings were used to give us a snippet of each of the things that have lent a hand in bringing down the free world - a nice touch to unload information without overloading.

I felt like there was a real effort at diversifying the characters, and for some reason in my head I kept imagining this ship as an Arc, with the people on it being one of each kind just waiting for the end of the world LOL don’t judge me, it’s my imagination, hard to control. Toby’s point of view guides us through the narrative as his narrative is the main one. I enjoyed being in his head and seeing things unfold from his point of view, seeing him mature as he battles his inner and outer demons - but as a reader I would have liked to see alternating points of view between him and Alya. See the same events through both their eyes which would have balanced out the different interests of these characters well and drawn on their individual characteristics and experiences in how they see things. Also, am I the only one who wants an individual book on almost every other character just to find out more about their background?! Especially Hiko. I just wanted to gather him under my arms and shoot daggers at anyone that comes close. Alya was pure kick-ass, I resonated with her on some personal level, how determined, feisty, no nonsense she was.

For me, what I enjoyed most about Pearce’s story was the way that this is all a possibility. With the endless amounts of dystopian books and countless movies that foretell the end of the world, I feel like Pearce’s perspective of looking at what would happen after the collapse of the real world rather than how it happens, has lent us readers a hand in discovering alternate realities of what could happen. We very may well end up on individual ships, battling it out for resources with survivors, who really knows?! This isn’t just a book about government corruption and the subsequent rebellion and uprising of its people - but this is a book about a true horror, when our world can no longer find a way to function and collapse around us. Loyalties are tested, humanity is called into question and I think that’s what I truly enjoyed about the story.

With a strong yet steady pace that has moments of hitching our breath, I found myself immersed completely in the book - which is saying a lot for someone who rarely reads steam-punky books let alone anything that involves the word pirate - but don’t be put off by that in the slightest, because this story is more about loyalty, bonds and relationships, tested in times of hardship. In terms of audiences, I feel like this could fit into the range of young teens to older readers and shouldn’t really be bound to just one category. There are many elements to this story that can appeal to all kinds of readers and Pearce’s writing and storytelling allows for us to dive into the story easily.

With another book in the works as this is a series, I honestly can’t wait to see what happens next because if you’ve read the book, you’ll be itching like me to get your hands on the next instalment. For the time being, this is Sahina, #TeamPhoenix, over and out!