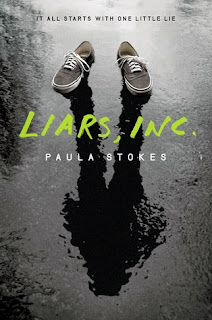 Max Cantrell has never been a big fan of the truth, so when the opportunity arises to sell forged permission slips and cover stories to his classmates, it sounds like a good way to make a little money and liven up a boring senior year. With the help of his friends Preston and Parvati, Max starts Liars, Inc. Suddenly everybody needs something and the cash starts pouring in. Who knew lying could be so lucrative?

When Preston wants his own cover story to go visit a girl he met online, Max doesn’t think twice about hooking him up. Until Preston never comes home. Then the evidence starts to pile up—terrifying clues that lead the cops to Preston’s body. Terrifying clues that point to Max as the murderer.

Can Max find the real killer before he goes to prison for a crime he didn’t commit? In a story that Kirkus Reviews called "Captivating to the very end," Paula Stokes starts with one single white lie and weaves a twisted tale that will have readers guessing until the explosive final chapters.

Liars Inc was one of the most anticipated books of 2015 for me, ever since I was shamelessly attracted to the green, grey and black cover and then intrigued greatly by the premise of the book. I had visions of this being an amazingly complex, twisted and mysterious story that would ruin my life. Unfortunately, though it didn’t quite live up to those expectations, it did pretty well on its own and I would deem it a worthy read.

Fans of We Were Liars (my review for which can be found here) and Gone Girl, (again, review here) would enjoy this book I think. It’s slightly “more” than We Were Liars in my opinion and “less” than Gone Girl - so the perfect in-between I believe for anyone looking for a mysterious read.

It all starts - with a lie. You know how lies have a tendency of snowballing until suddenly you find yourself stuck in the middle of a giant snowball thinking “oh sh*^%”. That’s how it all began for Max and his friends. One lie - forging slips and notes for students at school - yet suddenly Max finds himself running from the police, stuck inside a shed, with a gun in his hand, being accused of murdering his friend Preston.

The book opens with that scene, and then we are taken back date by date to see how this moment came about. I really enjoy story structures like this that begin with the chase/climax and backtrack over everything that led to this - it helps keep the tension alive I feel and in the case of Liars Inc, I found myself silently cataloguing all the moments that could potentially be useful in finding out how it happened and where we were going with the story. We are introduced to the trio who form Liars Inc - Max, his girlfriend Parvati, and his close friend Preston. They realised that everyone needs a cover story for one thing or another, either to hang out with their other half or slipping out of school just to avoid class, and they become the providers of these lies. Lies really are lucrative. Until the night Preston asks for a cover story of his own from Max to go visit a girl in Las Vegas.. and never returns. Instead news of his dead body does.

I feel like the author did a good job in introducing some diversity to the story, especially with Parvati who I really enjoyed reading about. Daughter to a military father, and also of Indian descent, she’s brown and beautiful - and lethal too thanks to her Dad’s background. She doesn’t shy away from her own culture and practices, something which I found hugely refreshing, especially when she rolled into a funeral (no clues on whose though!) in a white sari - which is traditionally worn in their culture when someone dies. She was smart, witty, rebellious, vivacious, yet vulnerable at the same time. She was my favourite character of the group. Max and Preston’s characters were also well rounded, both drawn together by their ability to see through the triviality of school. They may seem poles apart - Max an adopted kid, from a low income family while Preston is the son of a U.S senator, rich, and affluent. Even Parvati, whose Mum is a defence attorney. Yet Preston and Max were drawn together by bonds of friendship after Preston came to Max for surfing lessons - but rather than taking 1 lesson and cutting it off his rich-boy-to-do-list, Preston stayed, and came back time and time again, to improve, and learn. The dynamics of these 3 worked really well together and gave depth to the story.

Stokes’s writing is easy and funny, raising tension when the time comes. I felt so many of the scenes as they were unfolding, each revelation pricking me at the base of my neck. Max’s dry sarcasm is my favourite brand of humour, and I snorted out loud on more occasions than I can count. There’s a definite air of mystery and intrigue as the story unfolds, something which I felt was done really well, with each piece of the story rolling in at just the right moment. Well done to Stokes on that count!

Like I said at the beginning, I expected this to be an extremely dark, complex and twisted story, yet the path which Liars Inc took was somewhat more tame and predictable once you reach the end. But the fact that I enjoyed it still, says something about the writing and the plot. There were some gripes I had with the book, such as some of the stereotypical representations, of the cops for example - who were painted in the predictable good cop bad cop way, but could have been highly useful to the story without the need for painting an us vs them dichotomy when they brought Max in for questioning. Some of Max’s and Parvati’s actions themselves I called into question - like running away to Vegas to search for answers for your friends murder, whilst being number 1 suspect on the list, as well as aiming to get back in time to go back to school the following day? Highly unlikely and a weird trail of thought in my opinion which could have been played out better to include a more higher sense of urgency.

Yet nonetheless, I enjoyed the story and I’m glad I picked it up. As an addition, I’m going to throw a bit of colour and culture into this post, inspired by the lovely blogger over at “In Love With The Handmade” whose blog can be found here, her post on the book here, as well as her twitter, here.

I come from Bengali parents, we are practicing Muslims, and sarees are part of our cultural attire. Though I personally don’t have any white sarees to replicate Parvati’s looks, I will insert a picture of me wearing a few of my favourite ones - beware, they are extremely colourful! Sarees can be styled and draped in a manner of ways, I’m wearing it in a simple butterfly style. 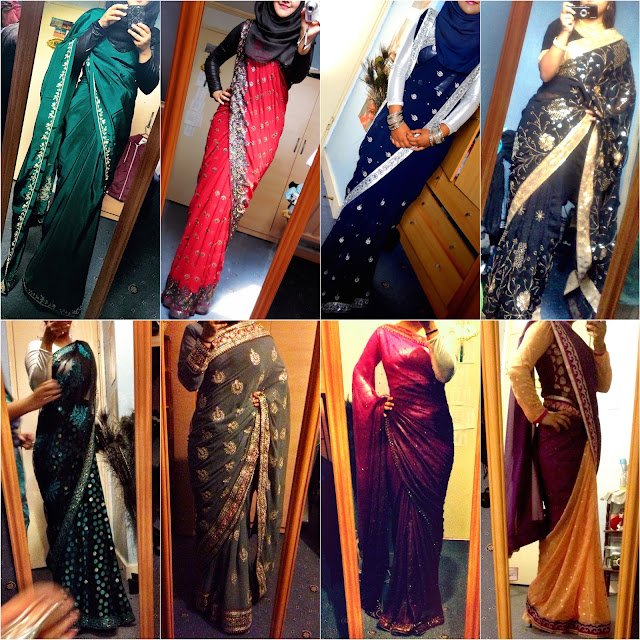 If you are interested in some other styles of how to wear them, you can find a link here on how to do so, with video tutorials included. If you try them out, I’d LOVE to see some pictures or post!