The Chosen One Chronicles - Book 1 - Review. 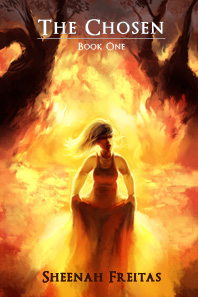 Kaia’s entire life has erupted in flames after an assassin appears and burns her village down. She’s rescued by a god from another planet who requests her help because she’s the descendant of their last saviour. Together with Reeze — the only other survivor from her village and her appointed guardian — they set off on a quest to find the treasures of the gods in hopes of preventing a dire prophesy.


Kaia and Reeze quickly meet the Tueors, a group of people many thought extinct, who are searching specifically for Kaia. Their intention: to protect the truth. As Kaia discovers more about the truth and her family’s past, she also learns of the Tueors’ bloody secret. Will Kaia be the saviour the gods have been waiting for? Or will she let the prophesy come true?

Buy it on Amazon.

My review:
Having been contacted by the author to review this for her, I pleasantly accepted ‘cause I love reading new stories from new authors and I was glad I did so ‘cause I thoroughly enjoyed the tale that the author composed in this beautiful story. It’s not often I read about Gods in stories and prophesies, the only other one being Starcrossed I’ve read by Jospehine Angelini but I’m glad there was more to it in this (:

Analysis of plot:
In this story about Kaia, we are quickly yet expertly indulged into the story where we learn how Kaia’s village was destroyed in a ravaging fire and many of her family and friends were killed. Yet we don’t lose the main character as another survivor by the name of Reeze rescues her, and we see them start on a journey that will change both of their lives.

Following the fire, both survivors find shelter with some unlikely characters which however, adds to the magic of the story as then they are transported into a new world where they meet more delightful characters who add to the context of the story. The journey continues and while it may have started off at a slow pace at first as the author builds the story and its characters, onto the second half we are rushed off our feet as we see the story unfold and without giving much away, I can definitely say the slow pace at the beginning was more than made up for by the later events!

Analysis of characters:
Beyond the storyline though, I loved the character of Kaia! She’s different from the usual girls we see as heroines in novels today, for the author built her up so that she can take pain, she doesn’t complain, she takes what she gets and learns to deal with it, which makes her an admirable character to read about and following her on her journey proves to be that much more amazing. Kaia believes, she absorbs, she questions, she hurts and she moves on, and I love that about her.

Also, while there were two sorts of love interests following Kaia in the story, I found myself drawn to Reeze who we see as the mysterious and serious one. We see him as one of those characters who doesn’t speak much and when he does it’s not the usual lengthy replies I’ve come to view from heroes in other novels, but his affection comes across in the way he acts with Kaia. Actions, here at least, speak louder than words ;) Silent but strong. *thumbs up*

Overall:
Overall, I definitely enjoyed reading this book. The author spins an amazing tale full of love, courage, a good basis on mythology about Gods and such, and she manages to bring it all together with writing that flows. I seriously can’t wait to read the next in the series! So thank you again, so Sheenah for giving me the chance to read and review her story and I urge you all to go pick it up in whatever format you can get your hands on!