It's hard to keep close a person everyone keeps telling you is gone.

It's been sixty-five painful days since the death of Juniper's big sister, Camilla. On her first day back at school, bracing herself for the stares and whispers, Juniper borrows Camie's handbag for luck - and discovers an unsent break-up letter inside. It's mysteriously addressed to 'You' and dated July 4th - the day of Camie's accident. Desperate to learn the identity of Camie's secret love, Juniper starts to investigate.

But then she loses something herself. A card from her daily ritual, The Happiness Index: little notecards on which she rates the day. The Index has been holding Juniper together since Camie's death - but without this card, there's a hole. And this particular card contains Juniper's own secret: a memory that she can't let anyone else find out.

I instantly fell in love with the idea of this book, as soon as I read the premise, which included a ritual the main character completes - daily index cards. As a keen journal-er, diary keeper, and general stationary obsessed person, this idea stuck out to me more than anything else in the blurb, and off I went on getting stuck right in, expecting a sweet and exploratory story of love and loss.

What I didn’t expect though, was how deeply moving this very simple story was. Juniper lost her older sister in an accident - she’s been keeping count of how many days it’s been since it happened, and continued on a tradition she started from when her sister was around - keeping a daily index card, to rate her day; the good, the bad, and everything in between. I was touched and saddened by the grief and heartache and loss our main character Juni feels, which was greatly portrayed by the author. The holes in happiness, the loss of feeling, the constant thoughts and echoes of ache, the emptiness. It felt really tangible to me and I feel like the author did a great job in showing how grief can manifest in different ways, through the different characters - whether that be obsessiveness for a ritual, or complete avoidance of a certain place.

The array of characters, from Juni, her parents, Kody, Angela, Sponge, Nate and Brand. When Juni loses one of the most important index cards she’s written, with what she feels like is her darkest secret, she sets off scavenging in the dumpsters to find it. This loss however, brings her so many gains in the most unexpected way, friends and acquaintances that she comes to cherish. The people she helps along the way, some unintentionally, some intentionally, was one of my fav parts of this story, because in the end, the author brilliantly shows that everyone is dealing with something, everyone has their own struggles and are fighting their own battles - just be nice.

Another discovery which really drives this story forward, is when she discovered a letter, written on the day of her sister’s death, addressed to someone nicknamed “You”. Juni’s desire to find out who this person was, this missing link in her sisters life which no one knew anything about, inadvertently helps to heal some of Juni’s grief, and though I am totally bummed that we never get to find out who this person is, I am kinda glad that their identity remains undiscovered, because in the end, this was her sister’s secret, a part of her life - and with her gone, I feel like it should go with her.

This isn’t a love story, despite the call of first love that Juni hears, despite what builds with Brand (so adorable, by the way) and I greatly appreciate that the author didn’t focus so intently on their relationship - but instead it was just a facet of the story, with emphasis on friendships, of loss, of family ties more - the book highlights a lot more important issues and does a great job on keeping focus on that.


As predictable as some parts were, you really won’t mind, given how intelligently and sensitively this book was written, with a great array of characters and the way it raises key issues, important issues, and all in all, makes this a lovely story for every reader. Thank you to Penguin for an ARC of this book.


Here's a picture I took of the book and my own index card. 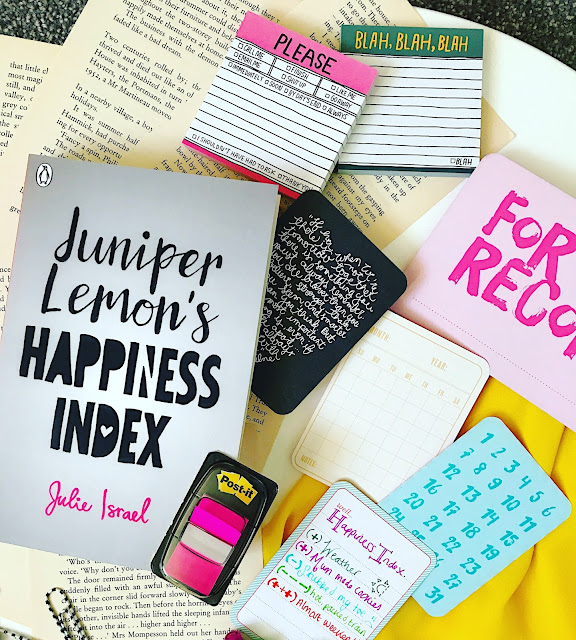