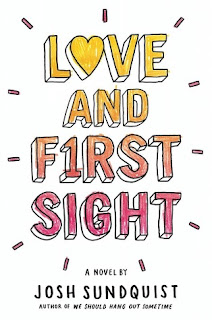 Love is more than meets the eye.

On his first day at a new school, blind sixteen-year-old Will Porter accidentally groped a girl on the stairs, sat on another student in the cafeteria, and somehow drove a classmate to tears. High school can only go up from here, right?

As Will starts to find his footing, he develops a crush on a sweet but shy girl named Cecily. And despite his fear that having a girlfriend will make him inherently dependent on someone sighted, the two of them grow closer and closer. Then an unprecedented opportunity arises: an experimental surgery that could give Will eyesight for the first time in his life. But learning to see is more difficult than Will ever imagined, and he soon discovers that the sighted world has been keeping secrets. It turns out Cecily doesn’t meet traditional definitions of beauty—in fact, everything he’d heard about her appearance was a lie engineered by their so-called friends to get the two of them together. Does it matter what Cecily looks like? No, not really. But then why does Will feel so betrayed?

I had no idea Josh Sundquist was a Youtuber. Now how is that possible? But nonetheless, I was so excited about this book, it had been on my to-be-read list for ages. Blind kids starts to see and the world isn’t quite up to scratch. Epic stuff, eh?

Sadly this just wasn’t my kind of book. There were a few elements of the book I did enjoy, but overall, I struggled to actually finish this book in the first place. Granted, I was reading two other books at the same time, but there was nothing in this book that made me want to speed-race to the end, nothing really to pull me through the story. The writing, though good, especially for a Youtuber as his debut book, the story itself was lacking.

The beginning few chapters were good and really got me interested, and I enjoyed (probably not the best word to use) reading about the kind of life someone blind leads; the everyday struggle with basic things that I really do take for granted. What I found really cool was the concept of perspective which our main character explains, isn’t something he actually gets. How can you have perspective for something when you have nothing, no visual markers, to compare it to? For someone who was born blind, how exactly are you suppose to understand the concept that some things look smaller when far away and get bigger as you get closer? That was so fascinating to me and I appreciated the author did loads of research to make this as authentic as possible. But for me at least, there’s a stuff a huge leap between writing authentically from something you yourself have experienced, to writing about something you have no experience with. It’s not the same thing, but still, I will say, the author did a good job with this and it was respectfully done.

The characters however, felt really underdeveloped to me. Even the main character, though this is all told through his narrative, felt lacking in depth and true emotion, it was all explained and not really something felt, you know? Does that even make sense? I just felt like as I was reading it, that this was just a book and not really a story that I was getting invested and interested in. There was no chemistry between the main character and the love interest either, despite understanding what drew them together, I didn’t really feel anything for either of them.

The story kind of went off track for me too; we see that Will decides to go after Cecily, but in between that mission, there’s a detour for him to see as many things as he can, while he can, with the impending possibility that his newfound eyesight after surgery might be relapsing. I get it in theory; this is his chance to see what he can just in case this does all fall through, but again, I didn’t feeeeel it. There should have been angst, a certain level of fear and vulnerability to have found something only to have the threat of it going hanging over you. But I felt none of it. In that sense, given it is YA, this was a very amateurish YA book; there surface elements were all there, but I feel like it may have been too much of a stretch to write this as a first book. In the hands of a more experienced author, this story could have had real depth. Don’t get me wrong, having said that, Josh made a great effort with this book. Just for me, I struggled to find something really engaging to get me to the end and went weeks without reading it - only to pick it up and finish it just to finish the book off. Great pun with the title and great fun with the cover - but this book just wasn’t for me.