All In Pieces - Suzanne Young; Review 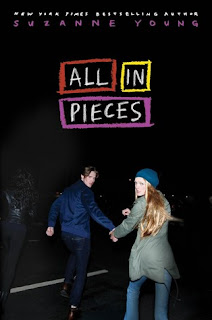 That’s how they classified Savannah Sutton after she stuck a pencil in her ex-boyfriend’s hand because he mocked her little brother, Evan, for being disabled. That’s why they sent her to Brooks Academy—an alternative high school that’s used as a temporary detention center.

The days at Brooks are miserable, but at home, life is far more bleak. Savvy’s struggling to take care of her brother since her mom left years ago, and her alcoholic dad can’t be bothered. Life with Evan is a constant challenge, but he’s also the most important person in the world to Savvy.

Then there’s Cameron, a new student at Brooks with issues of his own, a guy from a perfect family that Savvy thought only existed on TV. Cameron seems determined to break through every one of the walls Savvy’s built around herself—except if she lets herself trust him, it could make everything she’s worked so hard for fall apart in an instant.

And with her aunt seeking custody of her brother and her ex-boyfriend seeking revenge, Savvy’s fighting to hold all the pieces together. But she’s not sure how much tighter she can be pulled before she breaks completely.

This wasn’t a bad book by any means - it just didn’t capture my imagination and hit me the way it did for others. The writing style was really good and allowed me to get through the book unchallenged for the last 5-6 hours. The plot itself was also good - the bit about stabbing an ex-boyfriend with a pencil really is something - and a well deserved something at that.

I guess my main issue was with our female lead - Savvy. No doubt about it, she’s carrying a heavy burden and her life really sucked. Like really, really - and there were moments that made me feel deep-in-the-pit-of-my-stomach sad for her, for all she’s been through and continues to go through. I connected with her in the sense that she’s the sole sensible one, the one on who all responsibility lands - and she has no choice but to follow through because there is literally no one else to do it. Of course this means she always has her guard up, that she’s afraid to rely on anyone else, should at any moment it all come tumbling down. But even though all this was justified, I found myself getting annoyed with her character when it came to her relationship with Cameron. How she constantly had her hackles up and would respond not so nicely to just simple questions. Or how she would swap so quickly between not wanting pity vs wanting comfort vs not wanting pity again.

For that reason, I found that there was a part of Cameron that I didn’t like either - purely because I have no idea what he saw in Savvy in the first place and how he continued to fall for her when to me as the reader, there was nothing in Savvy to fall for. Not in some horrible way, but as a reader I only saw her as being somewhat rude, stand-offish. Cameron first takes notice of her in class and talks only to her, simple sentences as such but later he confesses that he started speaking to her because she looked like she really didn’t belong in a delinquent-based class. But again, to me I don’t see what exactly it was in Savvy that made her stand out to Cameron in that way - he barely knew her but liked her? I sound like such a sceptical little ass right now LOL there is more though - like how much Savvy disliked her Aunt (with good reason to, I get it) and we spend a lot of the book seeing how much Savvy hates her - only to see at the end, that suddenly she loves her Aunt and is happy that she’s proud of her? I liked the Aunt. Which made my dislike for Savvy more intense given that she didn’t. LOL I’m on a downward spiral here with this book. Okay. Things I liked. Things I liked.

I liked Cameron, he was a gem, a gentleman, he was also a bad-ass (him vs Patrick - ULTIMATE JUSTICE YEE HAW). The characters of Travis and Retha were also my fav, the way they both always stuck by Savvy and the way Travis defended her, those little macho things did make my inner fangirl swoon. Also, Cameron’s Mum was a total sweetheart.

The plot of the book was good and it weaved a good story which I happily peddled through, but the ending was too rushed for me and seemed to work out a bit too perfectly. The suddenly, all-was-good at the end, was a stark contrast to the bleak atmosphere we see constantly throughout the book - especially in the mind of Savvy who spent most of the book feeling despair, only to see her sprouting sunshine and roses at the end. It all felt rushed and unresolved still - did her relationship with her dad get better? Did she still live with him? I also wish we got to see more of what happened to Retha and Travis. All in all, it could have been executed better but the writing and style was good. Not the greatest book, given how much the main character annoyed me - but also not the worst book.