Todays post, continuing on the blog tour for the YA horror genre series #RedEye featuring the final book, Dark Room by Tom Becker, is an interview Becker has very kindly donated his time to! I pitched to him a bundle of questions ranging from his favourite book, if he held any superstitions of his own and his view on the paranormal *oooOOOOOooohHh* that was my half assed attempt at making ghost noises... *crickets chirp* MOVING ON! Enjoy the interview and be sure to check out my review for Dark Room here, as well as the other books in the series which includes Frozen Charlotte, Sleepless, Flesh and Blood and Bad Bones.
__________________

1. What gave you the inspiration to write Dark Room - was it just an idea you developed or something borne from your experiences/others?

Usually I plan my books months and even years in advance, but Dark Room sort of ambushed me, like a serial killer jumping out from the bushes. I’d been watching a lot of US TV drama like True Detective, which was set in the South and had this incredibly eerie atmosphere. Inspired, I sketched out a chapter with my heroine Darla in her trailer in the middle of the night, and the story just flowed straight from there.

2. Your reference to our current generations interest in taking “selfies” - what prompted you to add such an element to your story?

I have a long-standing hatred of posing in photographs, and spent years avoiding them. So I’ve watched the rise of selfies with a kind of sour amusement – people seem unable to experience any kind of event now without snapping themselves in it. Being the dark and generally vengeful character that I am, I thought I could explore this with my serial slayer, the Angel Taker.

3. Murders and monsters aside, do you personally believe in the paranormal and existence of ghosts and spirits?

Actually, I don’t – I like to keep the macabre and inexplicable confined to the pages of my books.

4. Have you had any paranormal experiences of your own that you would like to share with us?

Nothing springs to mind!

5. If there was any book that you wish you could have written, instead of the actual author, which book would it be?

I have soooooo many. Although, for the kind of books I write, it’s hard to think beyond Philip Reeve’s Mortal Engines. The central concept is so elegant and simple, yet opens up a world of imaginative possibilities. I read it in one sitting, consumed with jealousy.

6. Are you a trick or treat kind of person?

More of a ‘treat’ than a ‘trick’ kind of person. Everyone likes treats, don’t they?

7. Do you have any favourite Halloween traditions?

Killing trick or treaters when they knock on my door…

Probably more than I’m willing to admit, especially when watching my football team play. Judging by their results over the years, nothing I’ve done has had any impact, though.

9. If there is an end of the world apocalypse, what 5 items are a must have for you to take with you?

I feel as though I’m supposed to list 5 different kinds of chainsaws here, but it’s not really me. I’m just not sure I’m built for the apocalypse.

10. What’s your favourite horror movie? Do you think there is something lacking in todays horror genre that separates it from the old classics that didn’t require as much CGI/effects?

11. What do you think draws people to the horror genre itself? Why do we like to be scared?

People are always going to be drawn to the darker side of life – it’s just more fun there, there are more exciting possibilities. As a genre horror offers readers and viewers an adrenaline shot of fear without actually threatening their safety. There isn’t really someone hiding under your bed. You hope.

12. The perception of the horror writer is that he/she is just a little bit weirder than most. Do you find yourself — and other horror writers — to be more idiosyncratic than the average person?

Actually, another author told me that horror writers have been found to be the most well-adjusted of all writers. (Although this was fellow Red Eye horror merchant Lou Morgan, who may be a touch biased.) I’m pretty strange, alright – but then again, so’s the average person.

We don’t all kill trick or treaters. It’s just me.

14. Do you look to your own phobias to find subject matter? Are your stories the products of nightmares, childhood experiences, fantasies?

Stories are often stronger if there’s a kernel of personal experience at their core. When I grew up I had an irrational fear about not being to fall asleep at night, which duly kept me awake for nights on end. About 20 years later I wrote a horror set in a Victorian sanatorium, While The Others Sleep, which drew directly on how I felt back then.

15. Beyond your own work (of course), what is your all-time favourite horror book and why? And what is your favourite book outside of the horror genre?

I tend to read the macabre rather than the outright horrific – and if the macabre is what you’re after, it’s hard to look beyond Edgar Allan Poe. You can pick pretty much any of his short stories – he’s that good. My favourite book of any genre is Tigana, by Guy Gavriel Kay.
____________

As an extra treat, Tom Becker has included this creeptastic guest post for you all:

Short, creepy guest post about the inspirations behind Dark Room:

Welcome to Saffron Hills. Here, money is no object. Mansions nestle in the hills above the main strip. Sleek sports cars gleam in winding driveways. But like the films of David Lynch, dark secrets lurk beneath the surface of small-town life. In Saffron Hills, secrets stay hidden. This is a town where bad things have happened in the past, and are about to happen again…

In Saffron Hills, punk music is always playing on Sasha Haas’s record player. She dances in the aisles of Criminal Records to the sounds of X-Ray Spex. A band makes the walls shake in the basement of Shooters, a scuzzy bar down by the creek. And a violent man watches Darla O’Neill, waiting to confront her…

In Saffron Hills, someone is always taking photographs. A group of beautiful teens smile for the camera. A vicious killer lies in wait with a knife and a camera. Dead beauty queens and defaced self-portraits. Smashed glass and broken mirrors. Are you a Plain Girl or a Picture Perfect?


Welcome to Saffron Hills, where the Angel Taker would just kill to take your photograph. Are you ready for your close-up?
______________ 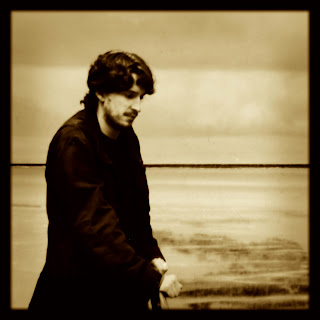 Thank you so much to Tom Becker for taking the time to answer these interview questions and I hope you all enjoyed reading them! His twitter is @Tbeckerlegge.

In the meantime, be sure to check out the review for Tom Becker's book, Dark Room, which can be found here. The other books in the Red Eye series can be found on this site, and for an extra special treat, check out the Terror Tree site where all 5 authors from the series will be discussing their books and much much more!