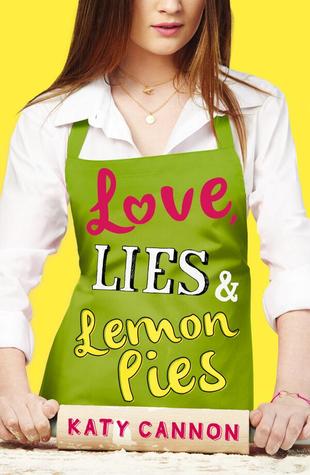 Love, Lies and Lemon Pies, the debut YA novel from Katy Cannon, is the perfect summer read for fans of Sarah Dessen and Louise Rennison. With a Bake Club recipe at the start of each chapter, this book perfectly captures the current appetite for all things baking! Lottie, our narrator, captures the experience of a young teenage girl navigating the world of school cliques, difficult teachers and new romance, creating a world that young readers are sure to recognise.

Since her dad died, life hasn't been the same for Lottie - it was easier to push her friends away than cope with their awkwardness. But when the school suggest she joins Bake Club to get her back on track, Lottie reluctantly agrees. But Lottie's uncertainty about Bake Club melts away as she rekindles her love of baking and gets caught up with Mac, the school rebel and another unwilling Bake Club member.

Both Lottie and Mac have secrets to keep, and as Bake Club progresses towards an end-of-year competition, the tension rises between the Bake Club members. Can Lottie keep up the facade of her perfect life without the others finding out what's really going on at home? Can Mac keep his demanding, heavy-handed father off his back - not to mention the school counsellor who's written him off as a no-hoper? And can their bubbling romance survive the pressure?

Thank you first off, to Stripes Publishing for being the wonderful people they are and sending me this, and another book for review. The sequel, but also standalone book, Secret Schemes and Sewing Machines is due to release on February 2nd and I’m on the blog tour roll for it. So stop by on February 14th ;) yes, Valentines day *makes schmooching noises* to see my review and an extra little surprise for you all on zee blog.

For now, on to the review we go! *pumps fist valiantly*
I’ve had LLLP (for short) on my to read list since last year, and after finally getting my hands on it, I can rest in peace. This was a cute and simple read - the kind of book you’re after to snuggle up in bed with, a mug of hot chocolate at your side, and of course, a slice of lemon pie.

I know there’s probably quite a few books out there who have done this, incorporated cooking or something otherworldly in the YA genre, into their books - but for me, it felt like a new refreshing take on baking and booking. (yes that is now a word I will use).

With Cannon’s easy going and fun writing style, littered with baking recipes at the start of each chapter, I really really enjoyed reading this book in the span of a handful of hours (hours it takes to read, directly correlates to how much I enjoyed the book, it’s a science thingymajiggy).

We are introduced to Lottie, Mac, Jasper (who I adored), Grace, Jasmine, Ella. I feel like each of these individual characters need their own book, which I’m sending is where the author is going with this since the next book (like mentioned before, Secret Schemes and Sewing Machines) is based on Grace. Anyway. These kids come together to join Bake Club - whilst some are there to avoid a hectic home life, others are there as punishment - it seems none of the characters really wanted to join for their love of baking - yet that’s what happened. They each fell for it.

I felt like the characters really made up this book for me. They were all individual, well rounded characters with hidden depth - and though I would have liked to explore each of them further, I understand that the main focus of this book was Lottie, and Mac. Lottie - who’s trying to keep it all together after her Dad dies, with her Mum resorting to hoarding as a way to stem the grief, and Lottie cutting everyone off to avoid the dreaded sympathetic stares. The memories of her Dad keep her going, but things are slowly slipping out her hands (like her grades and her home life). With a chance encounter with Mac outside the principles office and as an even unlikelier pair at the Baking Club - Mac and Lottie develop a friendship that brings both solace in times of hardship.

As for Mac? I loved Mac. Mac Mac Mac. *starts saying Mac and Cheese in head* He’s your typical misunderstood bad-boy-turned-baker, which I seriously loved. His passion for baking takes him away from the troubles of home and subtly battles the stereotype that boys don’t bake. It’s not a manly thing to do, say like working at your Dad’s garage or playing football/rugby. But Mac battles such notions and is brave enough to treat a path he enjoys, which I admired.

As for the rest - Jasper is one of my favourite characters from the book. With 2 parents as psychologists, that poor boy is under scrutiny all the time - what better way to rebel against that than by becoming a goth armed with a black hoody and black eyeliner - a sure way to worry the pants off your parents it seems. But under that image, Lottie discovers he’s one of the most cheerful characters, almost like a puppy, who’s just treading the familiar path of teenage rebellion - which goes to show, that first appearances aren’t everything. Lottie took the time to get to know Jasper, and he ends up becoming her best friend. Oh Jasper, you cutie.

All other characters provided a great backdrop to a heart warming story, that I really enjoyed. A quick and easy read that will leave you smiling, I’d definitely recommend LLLP, to any and everyone, especially with a slice of pie to keep you company.