This Is What Happy Looks Like - Jennifer E. Smith; Review. 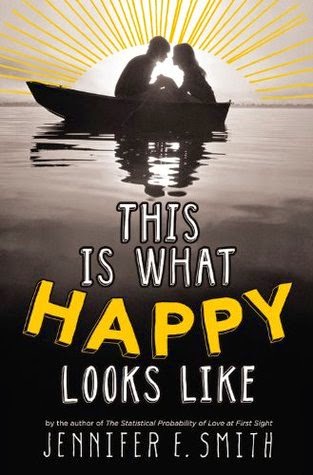 Summary:
If fate sent you an email, would you answer?

When teenage movie star Graham Larkin accidentally sends small town girl Ellie O'Neill an email about his pet pig, the two seventeen-year-olds strike up a witty and unforgettable correspondence, discussing everything under the sun, except for their names or backgrounds.

Then Graham finds out that Ellie's Maine hometown is the perfect location for his latest film, and he decides to take their relationship from online to in-person. But can a star as famous as Graham really start a relationship with an ordinary girl like Ellie? And why does Ellie want to avoid the media's spotlight at all costs?

After being in what we bookers call a “reading slump” I was in the mood to pick up something light and easy that I can just go through in a few hours, a contemporary romance that wouldn’t strain me - and This Is What Happy Looks Like fit that bill exactly.

I previously did a post on some of my favourite book covers of 2014 which featured the cover of this book and more, which you can find here by the way (10 points to Sahina for the shameless plug).

Anyway, Smith’s writing defines easy contemporary romance and TIWHLL (for ease of writing) was a very breezy and cute read. Graham Larkin - famous teen actor finds his way through some curious happenings to Ellie O’Neill - simpleton, witty poetry lover. I love that this opens with e-mails sent back and forth between the two, where Graham (by sheer happenstance) sent an accidental e-mail to Ellie to look after his pet pig, Wilbur. Ellie finds this e-mail amusing and responds - and over a period of 3 months, these 2 exchange emails talking about nothing which is everything.

I especially liked the fact that neither decided to reveal their identities to one another, and Ellie aptly framed this in her thought process where she described how knowing those 2 words - his name, would unleash the social media frenzy of googling him, finding his twitter and essentially would mean putting a face to his name. This in todays day and age, is especially accurate and something I identify with - in the way that all it takes is a name into google to somehow find out so much about an individual who you haven’t even met yet. Nice move Smith, kudos on the realism of that.

Hopefully without giving too much of the plot away, Graham persuades his movie team to shoot in Henley, Maine, for their next movie - so he can maybe have a shot at meeting the girl who through her e-mails, has struck a chord in him. Normality is all he craves given his paparazzi-ridden life where it seems even his parents have forgotten how to act normal around him. Graham arrives in Henley, and finds what he was looking for, and more.

Both Graham and Ellie are the kind of characters that make up fun contemporary love stories. Graham is your everyday boy next door that you just want to squish his cheeks, while Ellie is an average teen with the wit to match. I found them both to be a cute pair together, nothing mind blowing - but nonetheless enjoyable to read and root for. My only gripe being I don’t like the name Graham? LOL I just find it to be somewhat outdated and unfitting for the character I have moulded in my mind.

Smith’s writing allowed me to read this in a matter of 4/5 hours, which is always great. She constructed a good story with likeable characters and a happy ending that always makes me smile.  I just wish the story was somewhat longer or had spent more time on the relationship between Graham and Ellie. I felt like I didn’t see enough of them being together and this created the feel of “instalove” that I’ve come to dislike.

Overall this was a nice and easy read and I look forward to getting into the Statistical Probability of Love at First Sight *phew, a mouthful I know* sometime soon.