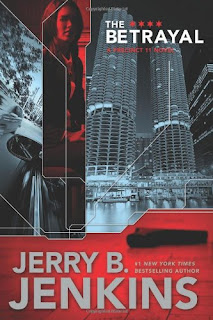 Summary:
Detective Boone Drake has just masterminded the most massive sting in Chicago history, bringing down the heads of not only the biggest street gangs in the city but also the old crime syndicate. The story is the biggest in decades, and the Chicago Police Department must protect the key witness at all costs. Despite top-secret plans to transfer the witness ahead of his testimony before the grand jury, an attempt is made on his life. And the person suspected of leaking this information may be one of the CPD’s own.

Buy it on Amazon here.

My review:
Firstly thanks to Tyndale publishing for being awesome and sending me an ARC of this book; the crime and thriller aspect of this book piqued my interest and I couldn’t wait to read it. Trust, betrayal, framing, it all came with this book and add in a sense of humour to rival the worst situations, you’ll find yourself wanting to unravel this mystery long after it’s finished ;)

Analysis of plot:
Despite my main interest being YA fiction, I have a special cosy spot for thriller and action packed novels (which stems from my love of CSI, The Mentalist, John Grisham Books) and I was happy to get a book based on detective skills when this came through.

We are drawn into the story, at first, with a plot where our main hero Boone Drake has been shot at, almost killed, doesn’t know who he can trust yet with the quirky writing from Jenkins, we find that Drake is still having a great month.

Embroiled in the life of the detective from Chicago’s gang enforcement section of the Chicago Police department, we are taken on a rollercoaster of a ride where Drake is trying to figure out the essentials as to what is going on in his life and why he’s being shot at amongst other mysteries. The twists and turns of the book “The Betrayal” will have you wondering what is coming next and who is doing what to whom.

Analysis of characters:
Jenkins lets his outlet of characters come in various forms yet the main one we as readers come to love and admire is obviously detective Drake. As we see him diving in front of bullets to save others, we feel like reaching out to save him, such was the clarity in which Jenkins wrote to engage the readers. You want to be Drake’s friend, at time you want to slap him, yet ultimately as he tries to untangle his girlfriend and vindicate her for the being wrongly framed, you want more than anything for him to succeed and fall into her arms with a happily ever after.

I loved Drake’s character; for you get further into the book you come to realize that he as a person isn’t just a tool in the department to help a bigger cause, but also that he alone represents truth, justice and reliability.


The story is full of love, intrigue, twisting plots, and of course betrayal. Jerry Jenkins does not disappoint. While Jenkins is a Christian writer and man himself, and there were undertones of that which could be seen in the novel, yet it did nothing to flaunt it in your face, for which I appreciate ;)