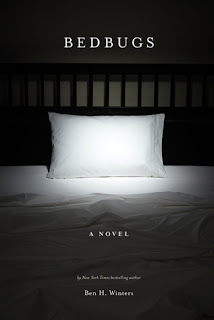 
Susan and Alex Wendt have found their dream apartment.Sure, the landlady is a little eccentric. And the elderly handyman drops some cryptic remarks about the basement. But the rent is so low, it’s too good to pass up.Big mistake. Susan soon discovers that her new home is crawling with bedbugs . . . or is it? She awakens every morning with fresh bites, but neither Alex nor their daughter Emma has a single welt. An exterminator searches the property and turns up nothing. The landlady insists her building is clean. Susan fears she’s going mad—until a more sinister explanation presents itself: she may literally be confronting the bedbug problem from Hell.

Buy it on Amazon
Rating:

My review:
Thanks to Quirk books firstly for sending me the ARC of this book (: another awesome read, this time, I couldn’t help shivering at the creepiness this book emanated. So a word of warning should you read this book – Do. Not. Read. It. At. Night. No seriously, the saying “sleep tight, don’t let the bedbugs bite?” – too true in this case.

Analysis of plot:
We start the story off with our main character Susan and Alex who move for various reasons and come upon a cheap apartment for rent, and they snap it up as Susan finds a bonus room to be perfect for her to start painting again. She feels like this is the room, and the house she wants. So after moving in, things start off at a dreary pace for the couple and child as they settle in, happy, meeting their eccentric landlord, and enjoying the new life they’ve built. As far as horror stories, this is pretty cliché right? Happy days, until terror strikes and while this book is no different in that style, it’s different in a refreshing way.

We find the pace picks up as the author Ben Winters introduces the idea that a series of bedbugs have been infesting in many houses in the area. That’s where, it seems the problems all start. One morning, our main character wakes up to find a small dot of blood on her pillowcase, and slowly comes to the conclusion that perhaps their apartment has come under attack from bedbugs.

After a series of events, Ben Winters turns the heat up as creepy events plague the house, one including Susan’s new painting of a couple, and one morning, being found with a series of bug bites all over the paintings face and Susan has no recollection of doing it herself. I can honestly say, Ben Winters has a talent for creepy-ing out events as the description of what happened to the painting has my skin crawling and thinking about it now, it’s doing the same. Such was Winter’s fluid writing throughout, as he set the pace and slowly, so slowly that you didn’t even realise it, he started to creep you out and plant seeds of doubt within your mind – which had me feeling like I had an itch somewhere on my arms. I loved his writing style as it was simple yet it got to you, and made you feel irked out. If you thought that a horror novel including the main villain being bedbugs couldn’t creep you out – you will be proved wrong after reading this.

The book ended .. well I won’t let you in on that secret, let’s just say along with a knack for scaring his readers, Ben Winters also had more than a few secrets up his sleeve which were revealed in the ending to this creeptastic book.

Analysis of characters:
While there weren’t many characters in the story, I found myself taking a liking to the laughable old Louis, the repairman for the apartment that our main characters lived in. An ageing man who smiled, who looked in on the landlady as she was old and fraying, yet with a talent to fix anything with determination. You can’t help but like his eagerness to fix whatever was bothering the tenants and this made me smile as in the end who tried to fix the biggest problem. Shan’t so no more without giving it all away, yet the other characters, such as Susan, her husband Alex and her daughter Emma were well rounded characters who you could easily connect to.

Overall:
I still stand by the fact that this was a creeptacular book. Do not sit in bed at night reading it or else you will find yourself at the mercy of paranoia. I don’t usually, if ever, get scared by a book, the sole exception being The Exorcists which had me reaching for my blankey. Yet this book will make your mind churn with the horrors within and definitely a book not to be taken lightly. Sleep tight people, and don’t let the beg bugs bite.