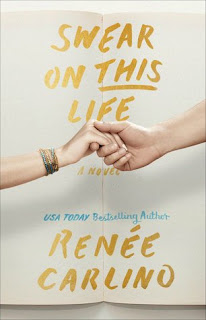 When a bestselling debut novel from mysterious author J.Colby becomes the literary event of the year, Emiline reads it reluctantly. As an adjunct writing instructor at UC San Diego with her own stalled literary career and a bumpy long-term relationship, Emiline isn’t thrilled to celebrate the accomplishments of a young and gifted writer.

Yet from the very first page, Emiline is entranced by the story of Emerson and Jackson, two childhood best friends who fall in love and dream of a better life beyond the long dirt road that winds through their impoverished town in rural Ohio.

That’s because the novel is patterned on Emiline’s own dark and desperate childhood, which means that “J. Colby” must be Jase: the best friend and first love she hasn’t seen in over a decade. Far from being flattered that he wrote the novel from her perspective, Emiline is furious that he co-opted her painful past and took some dramatic creative liberties with the ending.

The only way she can put her mind at ease is to find and confront “J. Colby,” but is she prepared to learn the truth behind the fiction?

I feel like I’m very much in the minority when it comes to this book, in that I really, really did not like it. At all. With so many 5 star reviews, and gushing comments, I had high hopes for this, but I felt so deflated when I finished it and thought ehhhhh.

It sounded like it was going to be epic - come on, girl and boy separated by so many years, only for the boy to write about a book about them and the girl discovers it - ensue emotional turmoil and angsts and ALL DA FEELS. But nope, there was nothing, nada, zilch, going on for me with this story. There was, to me at least, no real emotion, nothing that I could cling to and really feel - instead it was flat, too constructed, didn’t flow.

We follow the journey of these two characters through flashbacks of past and present. Emiline and Jace grew up together, a rough childhood with only each other for comfort through those dark times. They eventually separate, go on to lead their own lives, and told through the narrative of Emiline, we see that she has a boyfriend (a very annoying, boring boyfriend might I add) and wants to be a writer. One day, her friend reads the bestselling book by the hotshot author J Colby and passes it to Emiline to read. Turns out.. the book is about her, her past with Jace, and everything comes rushing back for her. As she grapples with her past and her current present and unfinished feelings for Jace, we eventually see her come face to face with Jace. And boy let me tell you, what a letdown that was.

Present day Jace was cocky, arrogant, hardened and to me, an annoying guy. There were no remnants of the Jace Emiline loved from the past, and Emiline was no golden girl herself. Both these characters, though meant to incite excitement and passion and tragedy, instead annoyed me to no end, with their bland, exaggerated and illogical selves. Even their past, though they grew up together and helped each other, even that lacked any sweetness to me and felt really contrived. It reminded me a lot of The Problem With Forever, another book where old childhood friends rediscover and rekindle their connection, but it felt flat, with no real chemistry between them. They were annoying, selfish, impulsive, lacking maturity. The moment when they both meet should have been fireworks and raging emotions, instead it was a big pffttt.

Anticlimactic - all through the book, as Emiline is reading the book, both her friend and Jace keep telling her to finish the book. FINISH THE BOOK. Apparently there is meant to be  big revelation or some great conclusion once she reaches the end - but once she does, there was nada, again. It wasn't mind-blowing like it was made out to be, but instead predicable and you guessed it, bland. My new favourite word. Why couldn't Jace just contact her after all this time and just ask to meet over coffee? Why write a whole book, about her, for her, and then leave it on the off chance that her friend or someone close to her will pass it to her to read? Communication is key people. I was not invested in the past or present characters or their story.

The writing was okay, in that I was able to finish the book in a couple of days, but the deeper I got into the book, I kept thinking surely it will get better, I mean people LOVE this book, it has to get better, right? So wrong was Sahina. I was disappointed from start to finish. The concept was there, the story was there for the taking, but the execution was all wrong. I have picked up the authors other book, Before We Were Strangers in the hopes that might be better. Review soon, as always people of the bookish world.